"A Glove Of Their Own"

Go into the children’s section of any major book store and you will find thousands of titles to pick from covering just about every subject one can possibly imagine. Many of them have been around for years, books and stories that have been enjoyed by those who are now parents and are passing them on to their children. Bob Salomon’s dream is that’s what will happen with “A Glove of Their Own” a book and labor of love he helped put together that hopes to teach children the value of sharing what you have with those in need. The story is about a group of young boys who despite not having any real equipment play and love the game of baseball. However a gift from a stranger teaches them the spirit of “Play it Forward” and that’s the idea behind the grassroots effort Salomon is spearheading.

The Howell resident has solicited the support of baseball players, like former Astros star Craig Biggio and Sean Casey of the Red Sox and companies like Rawling’s, Louisville Slugger and Modell’s. The idea is to not only tell the story of the importance of giving back but to raise money to help children who need sporting equipment. Salomon and the authors of “A Glove of Their Own” have set it up whereby proceeds from each book go to various charities and purchasers can even designate ones to support.

The 24-page book uses rhyme and pictures to tell a warm story of a group of young baseball players. But those involved hope it will do much more than that and eventually raise awareness and funds for children across the nation. It was inspired by a birthday party held for one of the authors children in which guests were asked not to bring gifts but rather donate baseball equipment for children for those in need.

The book comes out next month but you can reserve your copy now and learn more about the mission behind this grand slam effort by visiting their web site: agloveoftheirown.com.
Posted by Kevin Williams at 8:40 AM 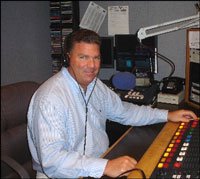 Kevin Williams
Ocean County, New Jersey
Kevin is currently in his 32nd year with WOBM and serves as Vice President of Quality Control in addition to being Director of the Shore Sports Network. This popular feature has been honored in 2000, 2001, 2002 & 2004 by the New Jersey Broadcasters Association for 'Best Public Service'. A nine-time New Jersey Sportscaster of the Year, Kevin also coordinates high school sports broadcasts on the Shore Sports Network: WOBM AM 1160 and 1310, 105.7 The Hawk and online at shoresportsnetwork.com Share your thoughts about the Hometown View Blog with Kevin at kevin.williams@mrgnj.com.